Sometime last year during a Friday afternoon session at Fidels Cafe. Jez, He who must not be named on the internet and myself were discussing the idea of doing some kind of project to present at the Wellington Lux symposium.

Due to quite an interest in things that go bang in an entertaining manner we came up with the idea of doing something to do with imaging exploding wires at the very very early stages of a high current pulse flowing through a fine wire. That is in a nut shell taking a photo of a wire just as it's being turned into plasma. 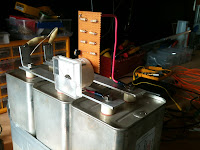 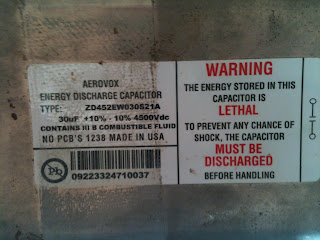 A fast energy switching device such as a triggered spark gap or an SCR.
Some kind of power supply for charging the energy storage capacitor.

Below is one of our first images using this method of imaging an exploding wire, the total exposure time is 3.2 seconds, the wire was exploded using an Information Unlimited High Energy Pulser 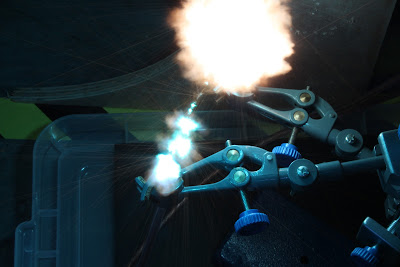 The justification for this project is that a lot of existing exploding wire imagery has been done which reveals late stage explosion information, that is most images show spectacular showers of sparks. This is a result of using the method of opening the camera shutter, exploding the wire or other device under test, and then closing the camera shutter. Peter Terren, Mike Harrison and The University of Canterbury  have all done some pretty cool experiments in this area.

Now from our discussions we set out to use shutter speeds in the order of 1/8000th of a second as this is the fastest shutter speed my DSLR is capable of. The reasoning behind the use of super fast shutter speeds is to minimise motion blurring of the rapidly expanding plasma.

Due to the shutter speed being ludicrously fast, the timing of camera shutter and electrical impulse have to be very precisely timed in order to capture an image.

Spark Timing:
After the initial test using the machine with no pity, I set about doing much reading on very precise and repeatable pulsed energy systems. This paper proved to be very enlightening on the subject of low jitter spark gaps. The book: Electronic Flash, Strobe by Doc Edgerton also proved to be a gold mine of information on rapid photography.

I decided to build a field distortion gap from components salvaged out of the machine with no pity. Rebuilding the gap was necessary on as the existing one was mechanically quite flexible and thus prone to the electrode spacing changing. 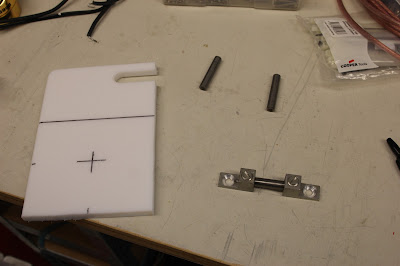 The gap electrodes are 10mm solid tungsten bar which is clamped into aluminium cable lugs. 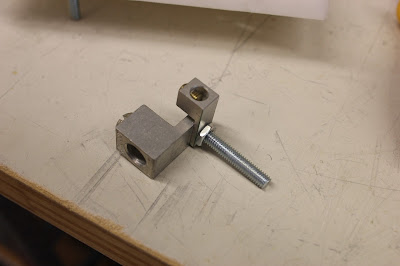 Two cable lugs are securely bolted together at 90 degrees: The larger lug clamps the tungsten electrode, while the smaller one is there to allow the conductor to be easily connected.

The spark gap baseplate is made from HDPE chopping board as it's a cheap HV tolerant construction material. Two small rectangular recesses were milled into the base plate to accommodate the smaller of the two cable lugs. 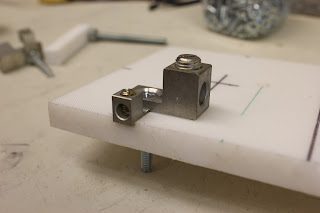 This recesses ensure that the electrodes are kept aligned to each other and mounted rigidly to the base plate.

A key feature of a field distortion spark gap is that the trigger electrode is biassed to half the voltage across the main electrodes. This was achieved by fitting 4x 10MΩ resistors as a voltage divider between the three electrodes.

The arrangement of the resistors also resulted in the sparkgap being nicknamed the flux capacitor of the system.

Spark Gap Trigger Generator:
In order to trigger the sparkgap an impulse of around 10 to 20kV is needed. The trigger pulse generator needs to have as short a propagation delay as possible with minimal jitter. I settled on a design using a salvaged pulse transformer triggered by a reasonably beefy SCR.

The logic level of the trigger system is isolated from the high voltage side by a triac optocoupler.
After putting it together a quick test with the oscilloscope revealed a logic to spark delay of about 3.4µs and very little jitter.

The trigger impulse is capacitively coupled to the trigger electrode by two 1nF ceramic capacitors in series.

The capacitors are necessary to provide DC blocking between the trigger system and the energy storage capacitor. This prevents weird leakage currents showing up in places where they're not wanted.

Capacitor Charging Supply:
The power supply for charging the capacitor is a pretty simple affair, consisting of two 110-6500V transformers with their primaries in series and secondaries in parallel. (NZ has a 230v mains supply) The output of the transformers is rectified by four HV diodes in a bridge configuration. A 16kΩ wire wound resistor serves to limit the charging current and ensure there is no explosion inside the case should the diodes go short circuit...

The charge voltage is controlled by  feeding the supply from a variac and watching the voltmeter.

Overall Assembly of the System:
The sparkgap, capacitor and piece of fine wire to be exploded are all connected together in series with 6 square millimetre speaker cable.


Timing:
The propagation delay of the DSLR is such, that it must be triggered around 63 milliseconds before the wire is exploded. This timing delay is handled with the use of a Camera Axe running a custom firmware. Final calibration of the system was achieved by taking many photographs of the trigger spark at faster and faster shutter speeds.

Testing revealed that the propagation delay in the camera varies by as much as 120µs depending what lens is fitted to the camera. Changing from landscape to portrait orientation increases the delay by 150µs... Enough to cause much hair loss over time... 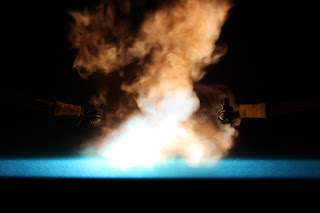 The pictures mostly speak for themselves... Here are some of the first shots that were successfully taken, All shots other than the light bulb are 0.15mm diameter copper wire being exploded at approximately 4000v:

The blue band in the image to the right is the rather bright flash caused by the electrical discharge: Things happen so quickly that in the time taken for the shutter to scan the sensor, quite a lot happens. 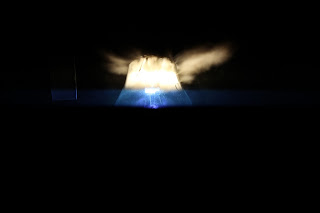 Rough calculations revealed that the plasma is moving at an average speed of around mach 2 during the duration of the exposure. The rapid expansion of the plasma is evidenced in the photograph to the left of a light bulb having a very bad day.

Changing the camera to portrait orientation so that the shutter scanned along the length of the wire revealed quite a lot more information about what was going on. Along with the fun of discovering the change in propagation delay of the camera. 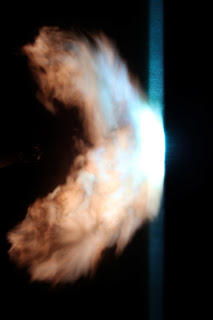 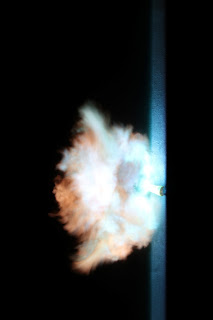 At this point I turned my attention back to one of the original goals of the project: This was to create lettering with exploding wire plasma in camera.

Attempts at shaping the wire yielded no real results due to the plasma expanding far too rapidly. One interesting side effect was the result of what appears to be the shock waves converging in the corner of the wire: The corner was very neatly "cut" into the black foam core used as the background.

The next idea was to constrain the plasma in some for of channel, long enough to take the exposure.
An hour or so in front of Sketchup later I had something on the go in my Ultimaker printer:

The first revision of the lettering turned out to be too small. The "L" exploded violently whilst spraying PLA shrapnel all over the workshop.

The "L" also failed to constrain the plasma for long enough.

After redesigning the moulds to be bigger and stronger, we started getting much better results: