Pyramider: The evolution from Spark Gap to IGBT

A number of years ago I was approached about a Tesla coil in a deceased estate of a friend of a friend you might say. Naturally this was an opportunity too good to pass up. 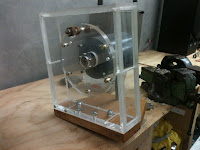 Upon first inspection I found out the coil had three 12kV neon sign transformers and a rotary spark gap.


I duly agreed to take responsibility for the creation and it then sat at work for a few years occasionally being tinkered with.

Around 2011 He who must not be named on the internet moved back to little ole NZ bringing back with him enthusiasm for building tesla coils and a REALLY big piece of power silicon: Thus began my renewed interest in power electronics...

The idea was to build what's called an Off-Line Tesla Coil (OLTC), in that there is no supply transformer: The incoming mains supply is rectified and fed directly into the tank capacitor.

OLTCs have some interesting design criteria: With the primary voltage being very low (compared to spark gap coil) The tank capacitor has to be huge in order to supply sufficient energy to the system.
The huge tank capacitor in turn means that the primary inductance has to be tiny for the system to have a sensible resonant frequency.

The primary currents involved are pretty massive, as a result the "wiring" has to be pretty heavy duty: In this case the conductors are made from 1.6mm copper sheet, 190mm wide. That is 300 square millimetres of copper!

Initial back of a envelope calculations were based on an input power of around 5 to 10kw to make things reasonably interesting. With a reasonably safe maximum switching frequency of around 7-800Hz this meant the tank capacitor needed to store around 10 to 12 Joules. Charging the capacitor to around 1KV, (more on this later) around 20µF was necessary.

Primary Construction:
As mentioned earlier the primary conductors are made from copper strip 190mm wide, there are a couple of reasons for this besides the ludicrous discharge currents...
The tiny primary inductance: Total inductance, which includes the parasitic inductances of the conductors, transistor, ESL of the capacitors etc had to be about 0.1µH or less. This is so that the resonant frequency of the primary matched the secondary.
The wider a conductor is the lower its inductance, therefore transmission lines made of nice wide strips of copper have lower parasitic inductances.
Flat conductors are also a lot easier to mount closer together: This reduces the parasitic inductance of the system further still. (more on this later)

The "Snorkel"Primary:
Owing to the low inductance needed, the primary had to be very small in diameter (the diameter actually ended up less than the height) this resulted in much headscratching... The required diameter was less than the diameter of the secondary... Eventually the solution of internally mounting the primary was devised by use of a little trickery:

In order to minimise parasitic inductance, I had to devise a suitable feed line to connect the primary turn to the capacitor and transistor assembly. A bit of a hunch and a few hours of sketching later a plan was devised to fabricate a shape from copper strip and then roll it into a combined primary turn and feed line... Below is a sketch of the result:
The above shape was made by cutting strips of copper sheet that were then TIG welded together, this approach was taken as there was a shortage of material (it was rather expensive)

The welds were linished flat and all the sharp edges were polished off. I then put the whole part through a sheet metal roller to give the final shape.

Tank Capacitor:
Capacitors in Tesla coils have a pretty hard life, they're charged to high voltages and discharged very quickly... Only to be told to do it many times per second. So naturally they have to be very low loss and rated to huge pulse currents.
Currently about the best off the shelf solution is to connect multiple smaller capacitors in series-parallel to give the appropriate capacitance, voltage and current rating. In this case depending on tuning there are about 40 capacitors in parallel. The capacitors are mounted to a parallel plate feed line (think double sided PCB) made from two sheets of 1.6mm copper spaced 5mm apart. This is an idea I borrowed from Steve Connor and Greg Leyh. The capacitors connect to the plates using threaded brass studs and copper tubing spacers.

One day I would like to build a coil using water cooled capacitors designed for induction heating from a supplier such as Celem: Megawatts anyone?


Mechanical Assembly:
Making the components necessary to hold everything together is a little interesting:
For one tesla coils generate high voltages - Many of the components have to be very good insulators.
Ferrous components can get hot due to induction heating (Tesla coils tend to generate rather large EM fields around the primary)
The result of all this is that I tried to use plastic components as much as possible...
The secondary former is supported by a combination of 10mm threaded nylon rod, 3d printed bushings and PVC pipe columns.

Water Cooling System:
For a lot of the initial running, the power consumption was limited to around 5kw. This changed quite dramatically when I finished building a three phase input supply. A brainwave to do with the implementing a pulse forming in the charging circuit made things even more dramatic.

The side effect of much more power is well, much more heat... Until this point we had been using a fan cooled aluminium heatsink, this was ok but things were getting a little hot.

Enter water cooling: I have a friend who's a rather brilliant machinist. We spent an evening drawing up a water cooling block to suit the transistor. An hour or so on the CNC machine later and presto.

For the first test I lashed the system together using a plastic bucket and a spare PC water cooling radiator I had lying around.


The first results were more than a little exciting.... The cooling water stayed below 27 degrees celsius during many power runs like the video below... Making Toccata and Fugue even more epic. 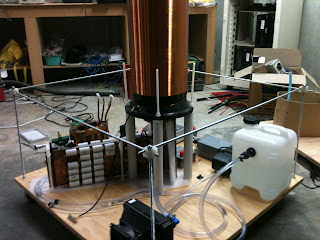 So What's Next??
I've made a better water reservoir than a bucket, Hansen plumbing fittings are great for building crazy stuff like this.

Still to be fitted is a new radiator from Koolance: As a final teaser here's the CNC machined mounting brackets for it... Next post will detail the power system.

Posted by Unknown at 9:07 PM No comments: