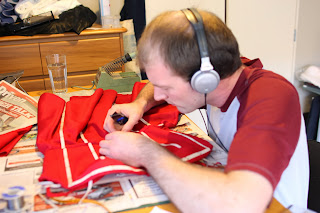 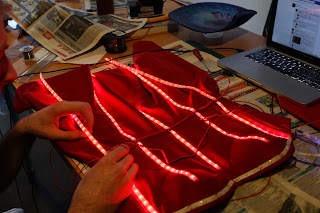 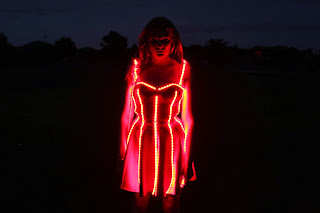 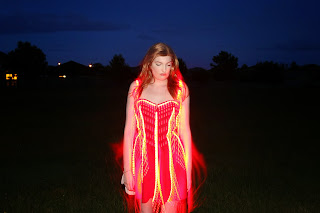 My friend has an Abene 3-Axis CNC machine, it's capable of lifting 1000kg on the table... Pretty grunty. I've used it for making Tesla coil parts, making custom camera accessories, and even teaching his 12 year old stepdaughter CNC programming. 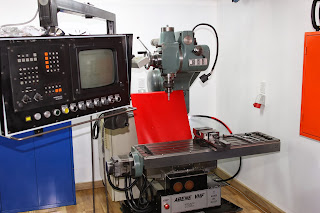 Due to making such things as the centre plate for a twin plate car clutch, and because it's well cool. We decided it was time to build an addon rotary 4th Axis.
The controller, a Heidenhain TNC 155b which despite being as old as me is still capable of driving 4 servo axes with 1 micron positioning accuracy. It's even capable of 3D graphics! 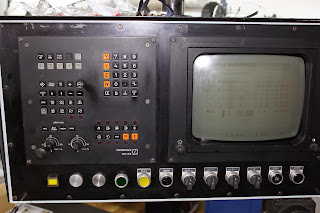 The controller outputs 0-10Vdc which is fed into a dc servo amplifier for each axis.


The amplifiers then output up to 100Vdc to the DC brush motors which drive the ballscrews on the axes. 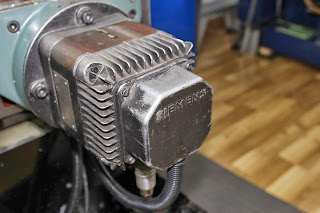 The servo motors have a tachogenerator mounted to the opposite end of the shaft: This generates a DC voltage proportional to the speed of the motor. This signal is fed back to the servo amplifier for the speed control loop.

On the linear axes the position control loop is closed by use of linear glass scales which output a quadrature signal of two sinewaves back to the CNC controller. 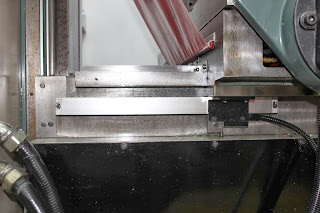 The 4th axis is a little different. Mechanically it's a rotary table that would normally be used for manual indexing of parts on a milling machine. 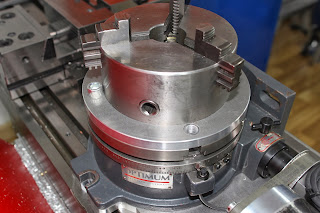 The table is driven by a 1000w dc servo motor with a 3:1 belt drive reduction. When the servo is at maximum speed (3000rpm) the table rotates at around 10RPM, a little exciting when there is a large part in the chuck. 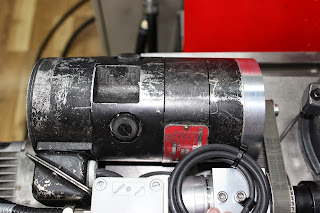 Due to the machine originally being only 3 axes with an optional 4th axis, we had to add an extra servo amplifier. 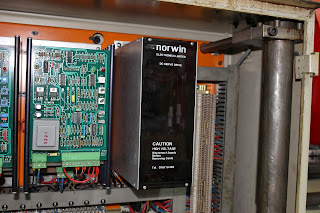 The servo we used has a higher voltage tachometer than the amplifier was designed for. Not wanting to allow many dollars worth of smoke out, I modified the "Personality Module" of the amplifier slightly to allow a higher input voltage.


The mechanical loop is closed in this case by a Heidenhain rotary encoder which is connected to the input shaft of the rotary table. 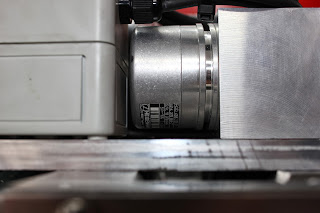 The encoder is held in place by a large block of aluminium machined to suit. Inside there is a flexible shaft coupling between the encoder and the input shaft of the rotary table.

Electrically the 4th axis is pretty simple:
A small proximity switch is used for the initial homing of the axis on startup. 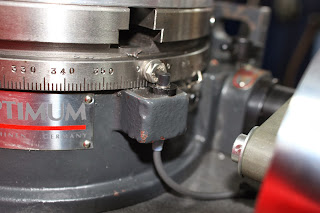 All the connections are made inside a tiny electrical enclosure, all the holes were CNC machined of course :) 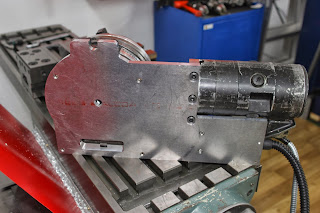 All the parts are mounted to a 12mm thick aluminium base plate that was also machined in the CNC.

It took a couple of evenings working till way past midnight but the result was well worth it. 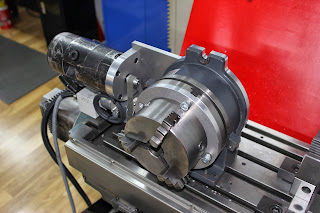 Working for Victoria University of Wellington, we use Lego Mindstorms for teaching some of our robotics papers as part of our Bachelor of Engineering. (yes we get paid to play with Lego)
The Mindstorms battery packs have been wearing out lately. In the interests of being environmentally friendly we are repacking them with cells from Battery Space.
The cases are held together with aluminium rivets which have to be drilled out to get inside.


With around 20 battery packs to open: I wrote a quick program on one of my friend's CNC machines to do the drilling for me. Each pack took less than 30 seconds to open as a result.
Posted by Unknown at 4:02 PM No comments: