Twisting Rope in a Repeatable Manner

Twisting Rope in a Repeatable Manner:
The name of this problem was "Twisted Rope" and was based on the phenomena that a rope will form loops and or coils when it is twisted sufficiently.

We set out to build a rig that could quantify when and how fast a rope would twist up as accurately as possible. The rig had several components...

Sliding Carriage:
The most important part of the rig was a sliding carriage which one end of the rope was fixed to: This allowed the rope to be twisted whilst the tension in it was measured. The carriage was also used when the rope was allowed to contract under a constant tension.
The carriage was made from a simple piece of wood and two lengths of PVC pipe.


The sliding of the carriage required two very parallel steel rods for it to run on. Building the rig frame such that the rods were parallel and rigid required a lot of thought and careful adjustments.
Most of our rigs are built using lab retort stands and rods, this rig was no different. Once the rig frame had been assembled with all attachments and bracing, there were no fewer than 28 lab boss heads holding it together. 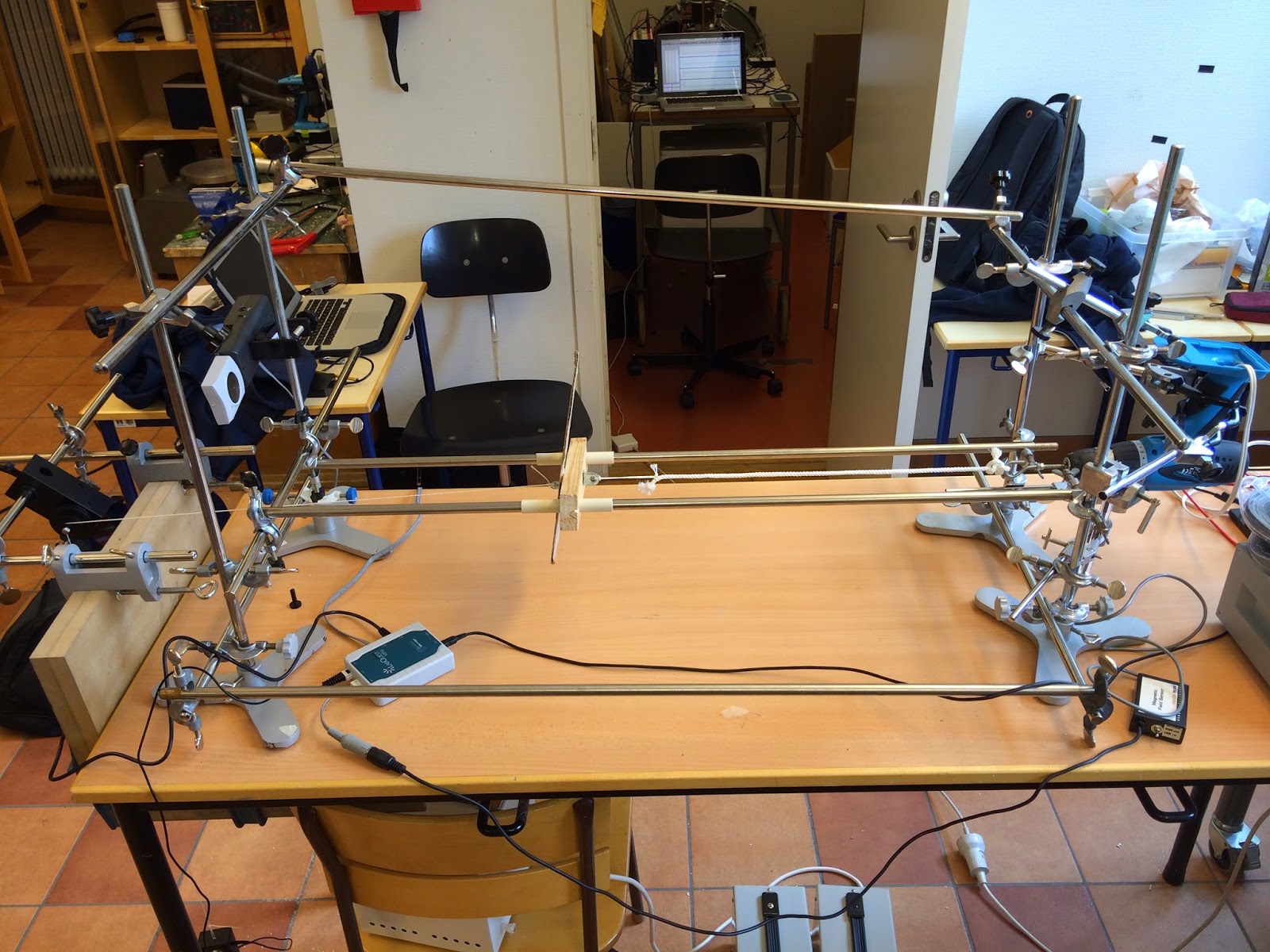 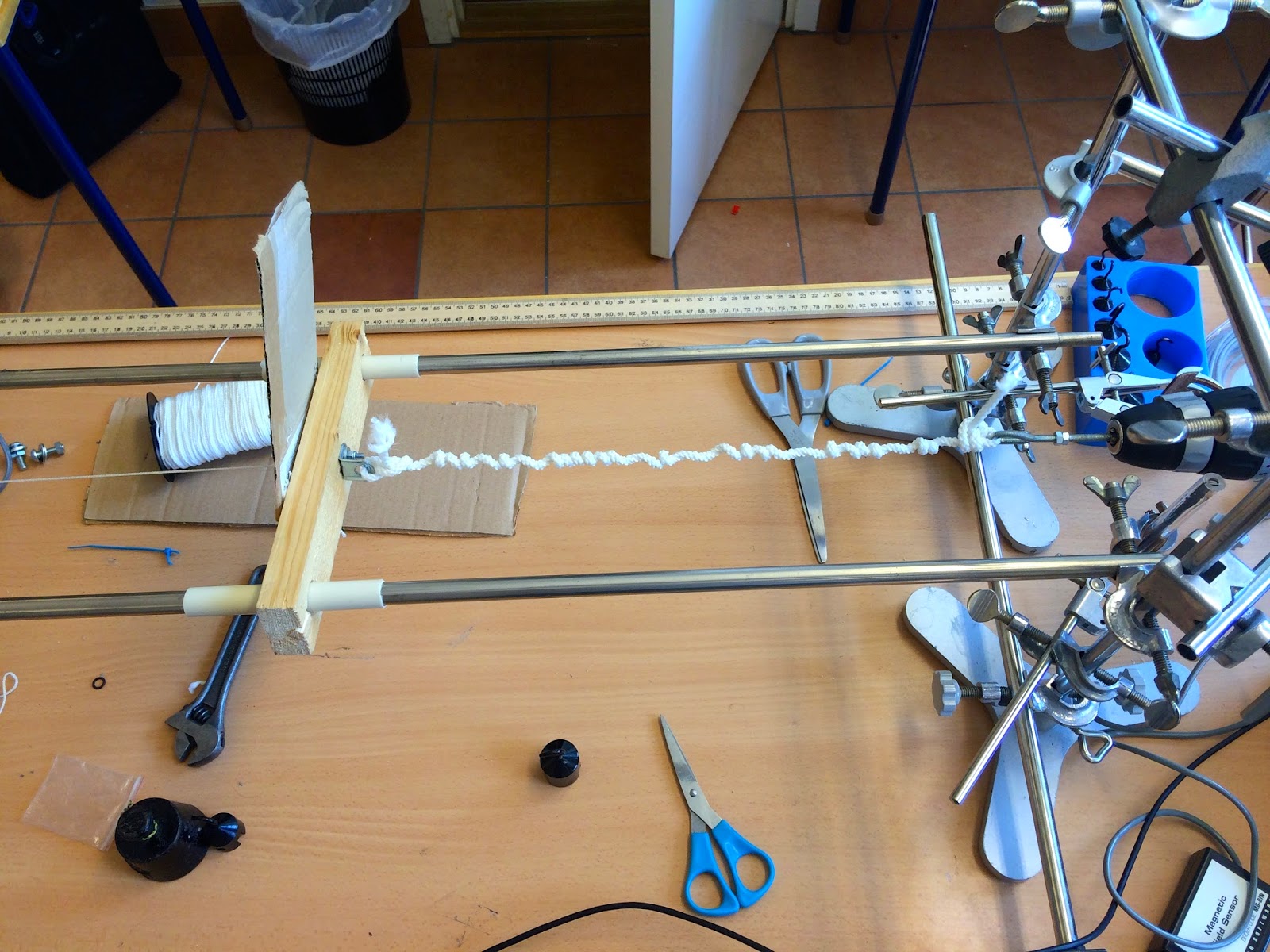 Twisting the Rope:
We initially started by using a hand crank to twist the rope up, however this proved tiresome and the winding speed was not consistent. Therefore we fitted a cordless drill to the rig, it was powered by a variable power supply so the speed could be controlled. A two position knife switch was wired to allow reversing of the motor. 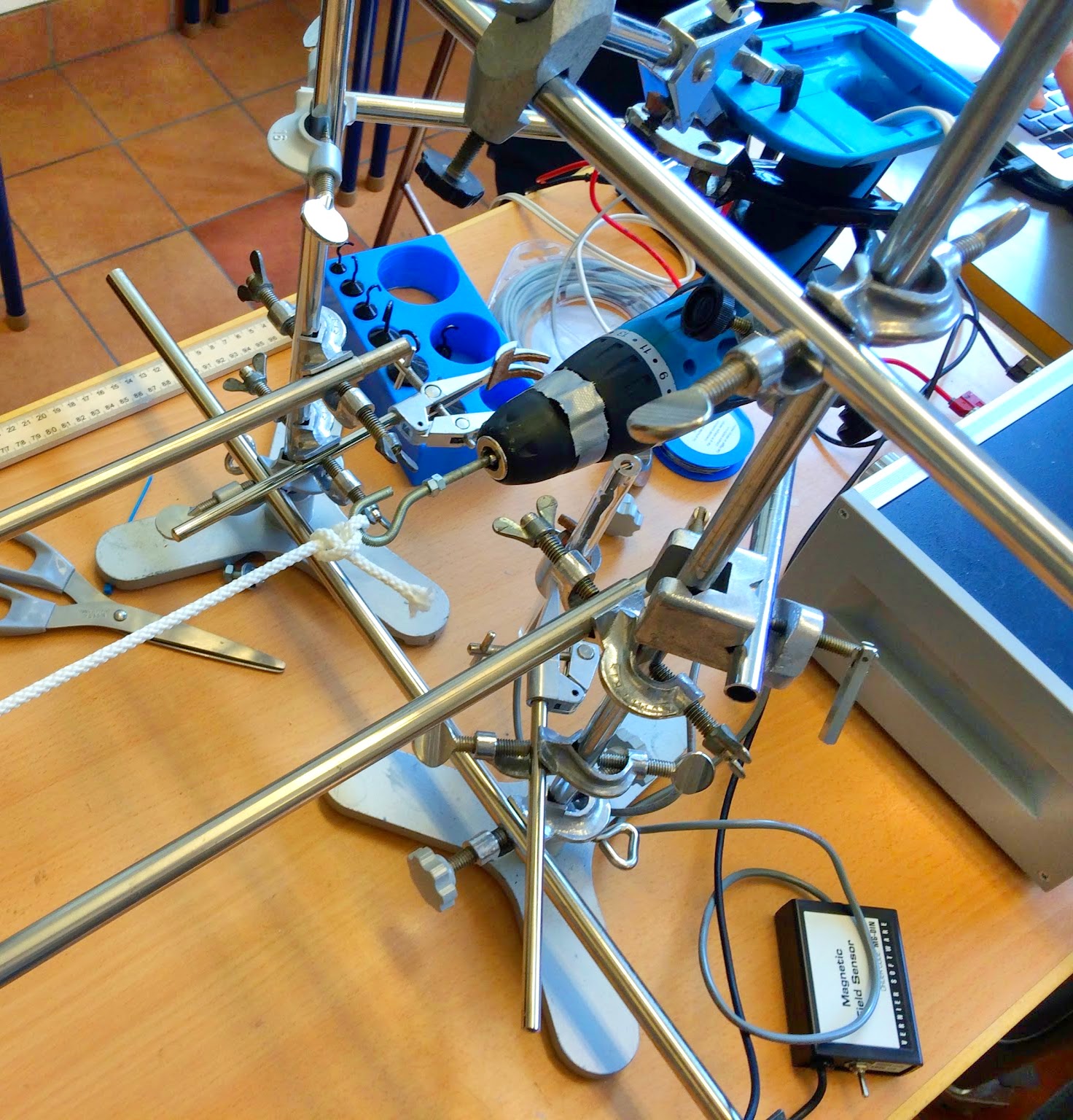 We later found out also that the winding speed influences the behaviour of the rope's looping somewhat. The video below shows this phenomena.

Counting the Turns:
In order to count the number of turns in the rope we used a Vernier magnetic field sensor and a magnet attached to the drill chuck. A simple threshold detection in Excel when importing the resulting data was used to count the revolutions of the drill chuck and thus the rope. 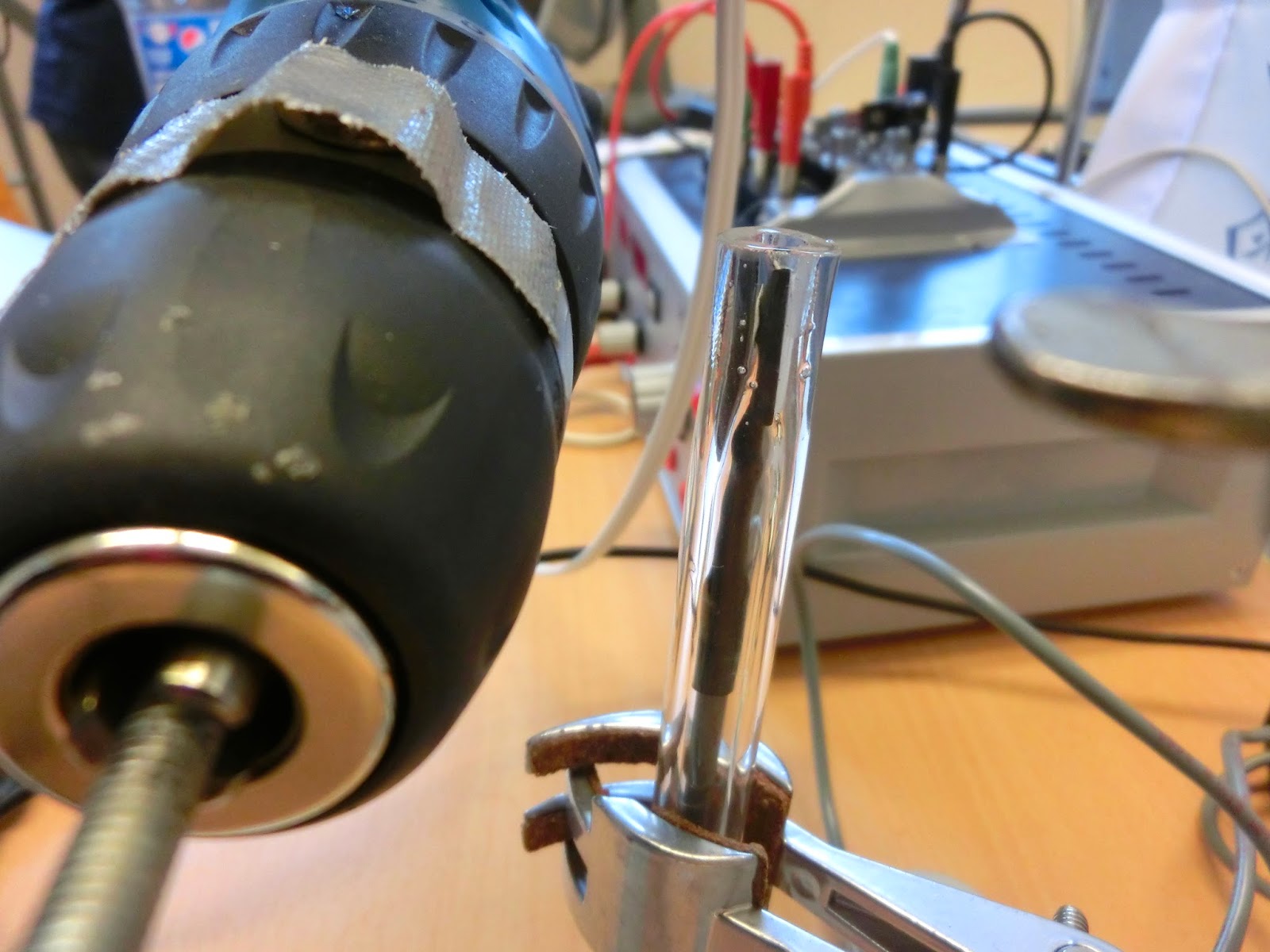 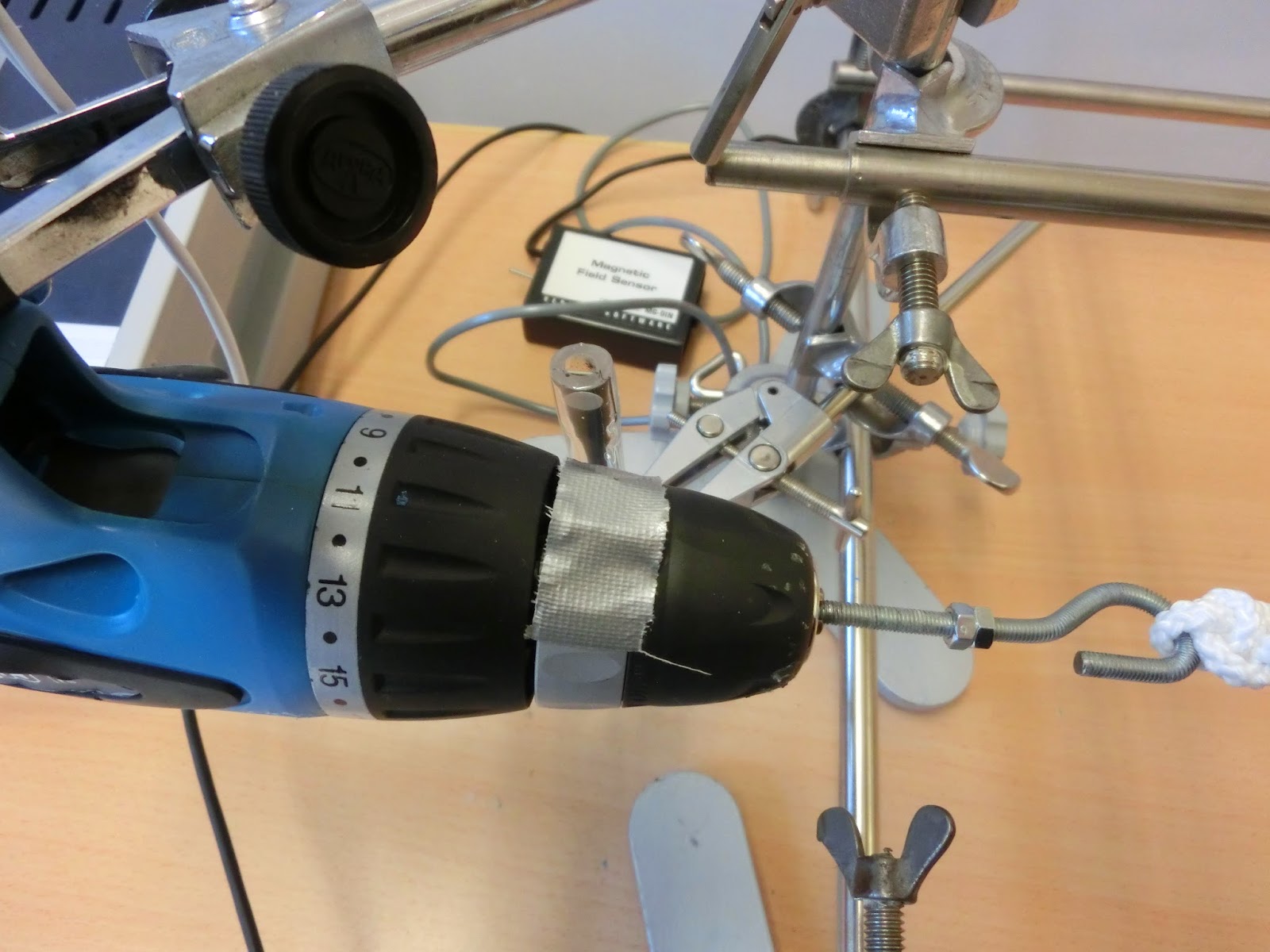 Measuring the Rope Contraction:
The rope contracts as it's being twisted: Evenly at first, until such point that the rope loops. We tried two approaches to measuring the movement of the carriage.
The first was to use a Vernier CBR 2 which is an ultrasonic range sensor. The sensor was mounted at one end of the rig with a cardboard flag as a target mounted to the carriage. 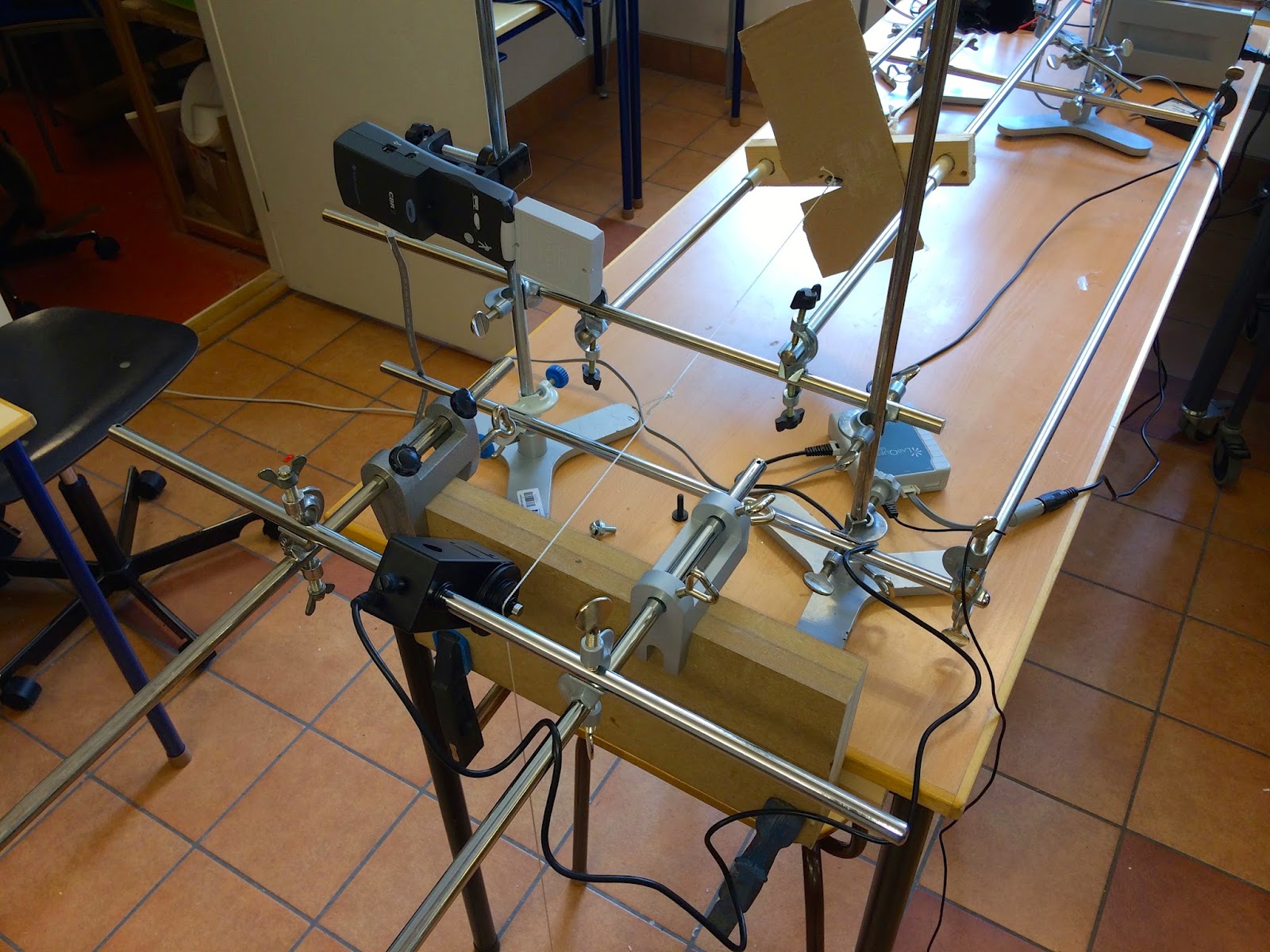 This setup worked ok for measuring the linear contraction, however ambient noise prevented us from acquiring sensible data whenever the rope looped.
I quickly tried making a crude rotary encoder by fitting a slotted pulley to the end of the rig. That is there's a string that runs from the carriage over the pulley and then down to a mass hanging from the end.


A light in a tube was shone through the slots in the pulley and a Vernier light sensor was used to count the light-dark transitions. This worked ok, however the pulley had too few slots to give the kind of resolution I wanted.
Our next approach for measuring the contraction of the rope was to borrow a Vernier rotary motion sensor and use it in place of the pulley at the end of the rig. The motion sensor comes with a stepped pulley attachment.

This worked quite well and when the contraction data was compared with data from the force sensor we were able to detect the stretch in the string during looping events.

Measuring the Tension in the Rope:
During tests where the rope was not allowed to contract, we needed to be able to measure what tension it was under. A Vernier force sensor was mounted at the end of the rig for this.

During tests where we kept the rope under constant tension by hanging a mass, we still had the force sensor hanging from the string: This gave us data with which we attempted to quantify the magnitude of the stretch in the string. The stretch proved to be quite significant whenever the rope looped suddenly. 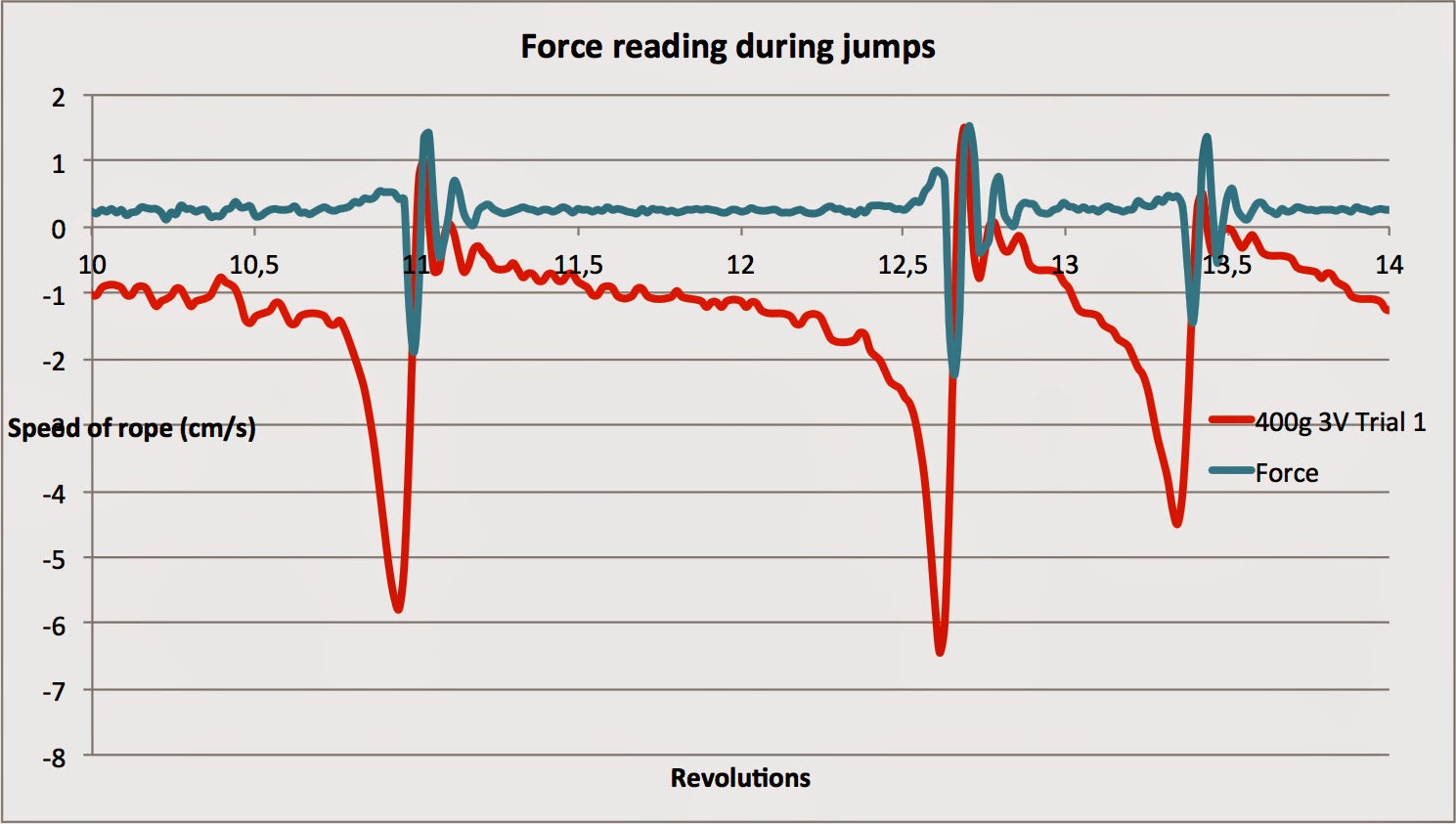 Gathering Data:
All of the vernier sensors were connected to a LabQuest Mini and then the data was gathered using Logger Pro. 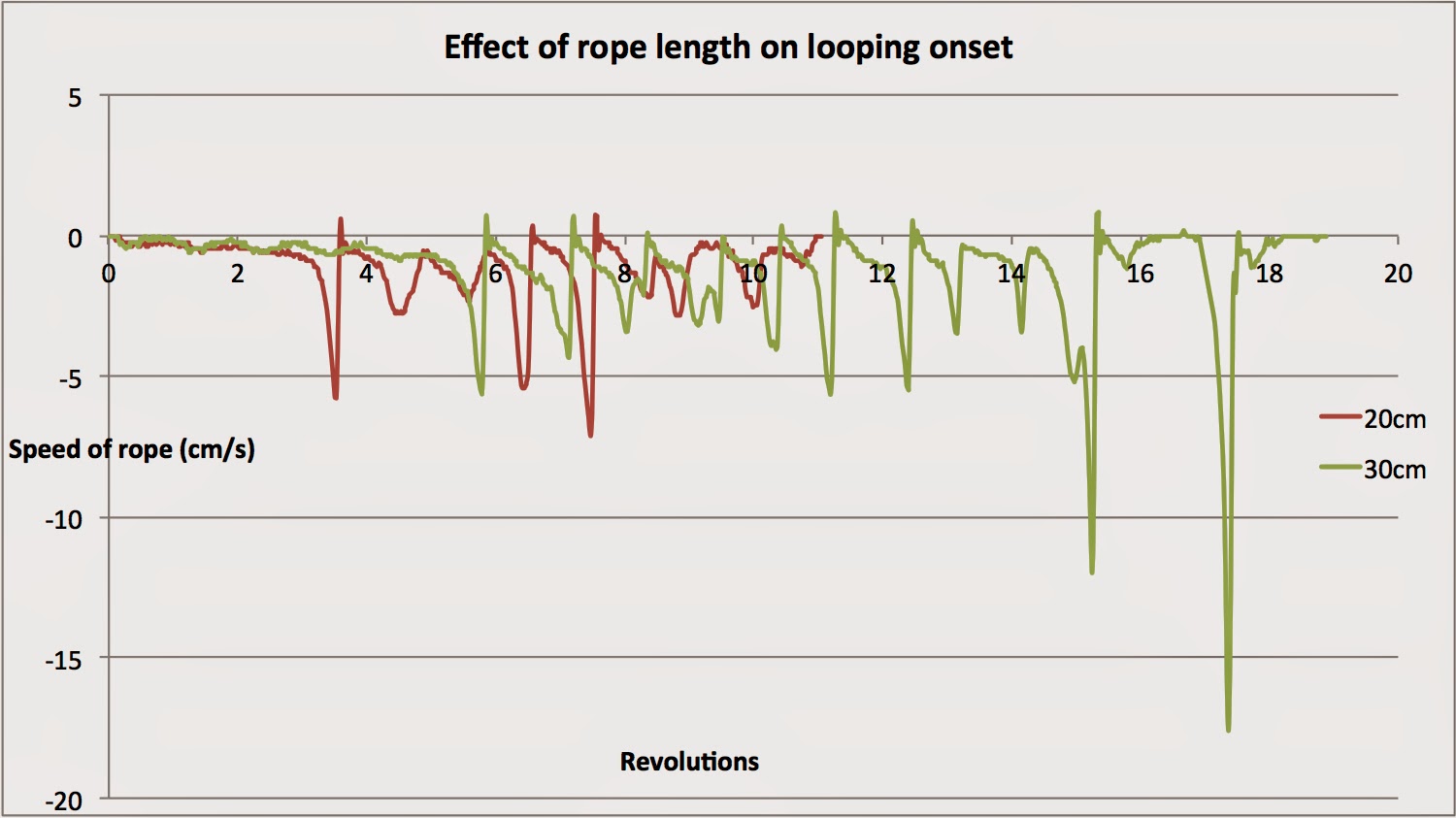 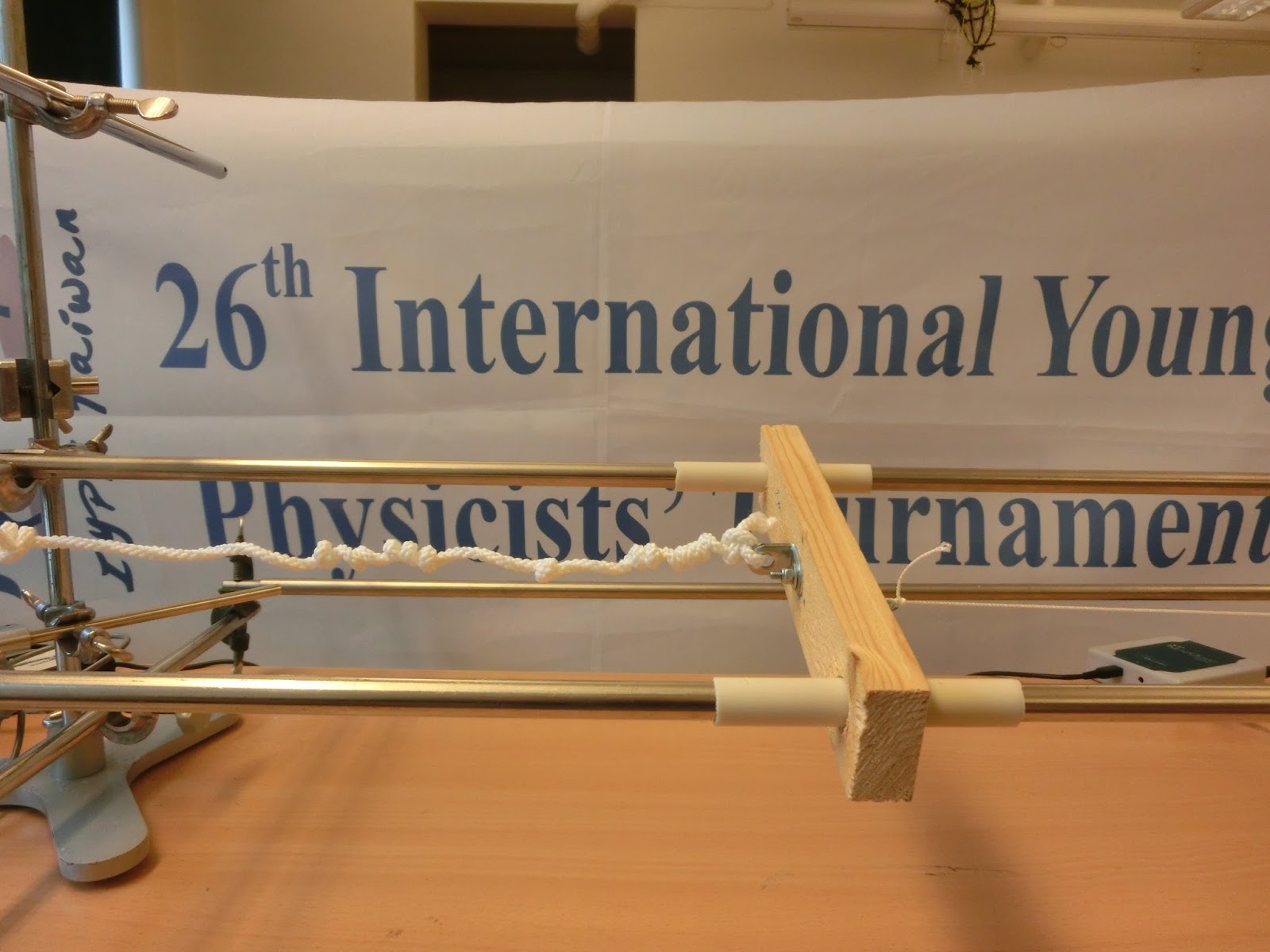 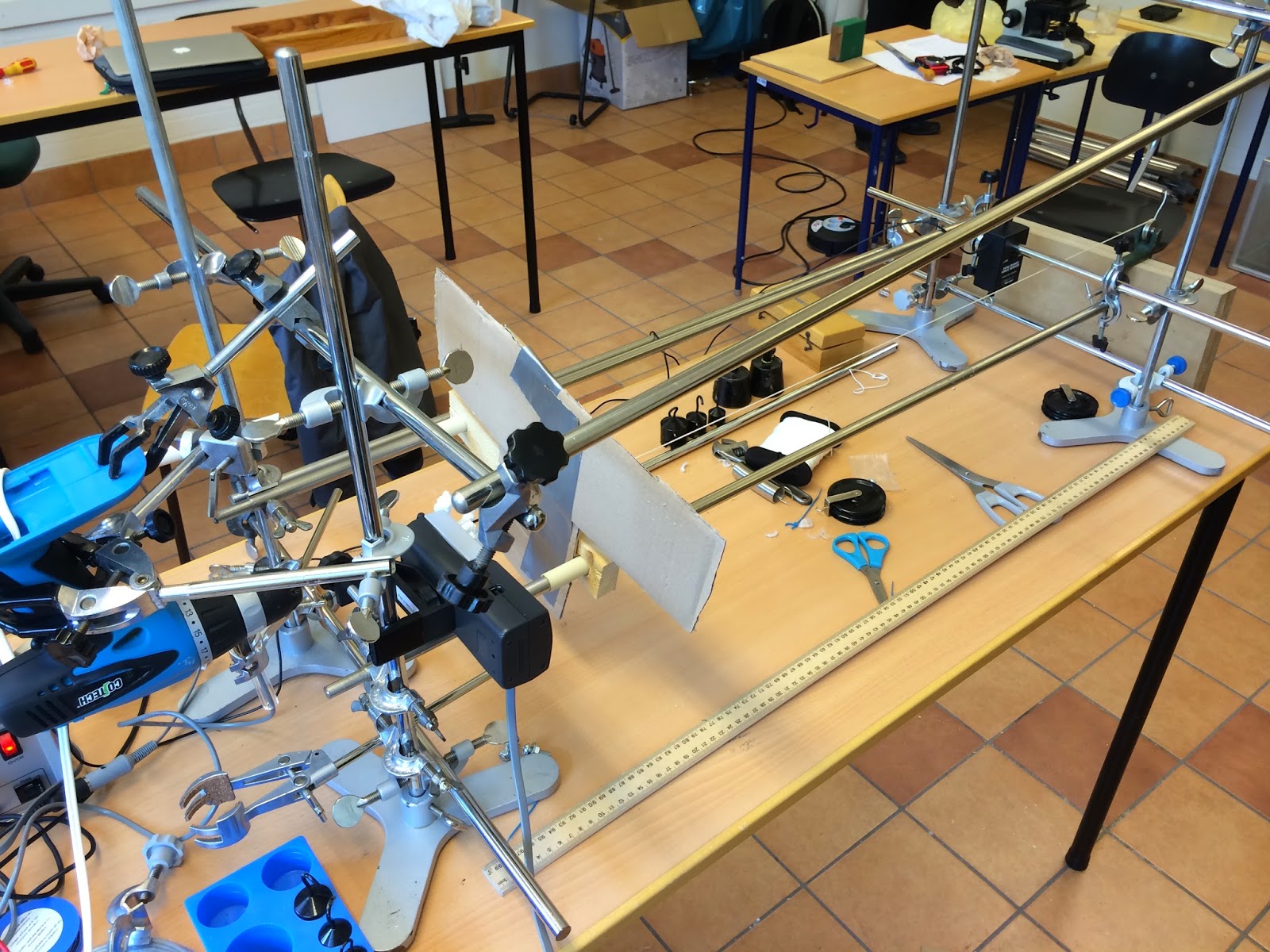 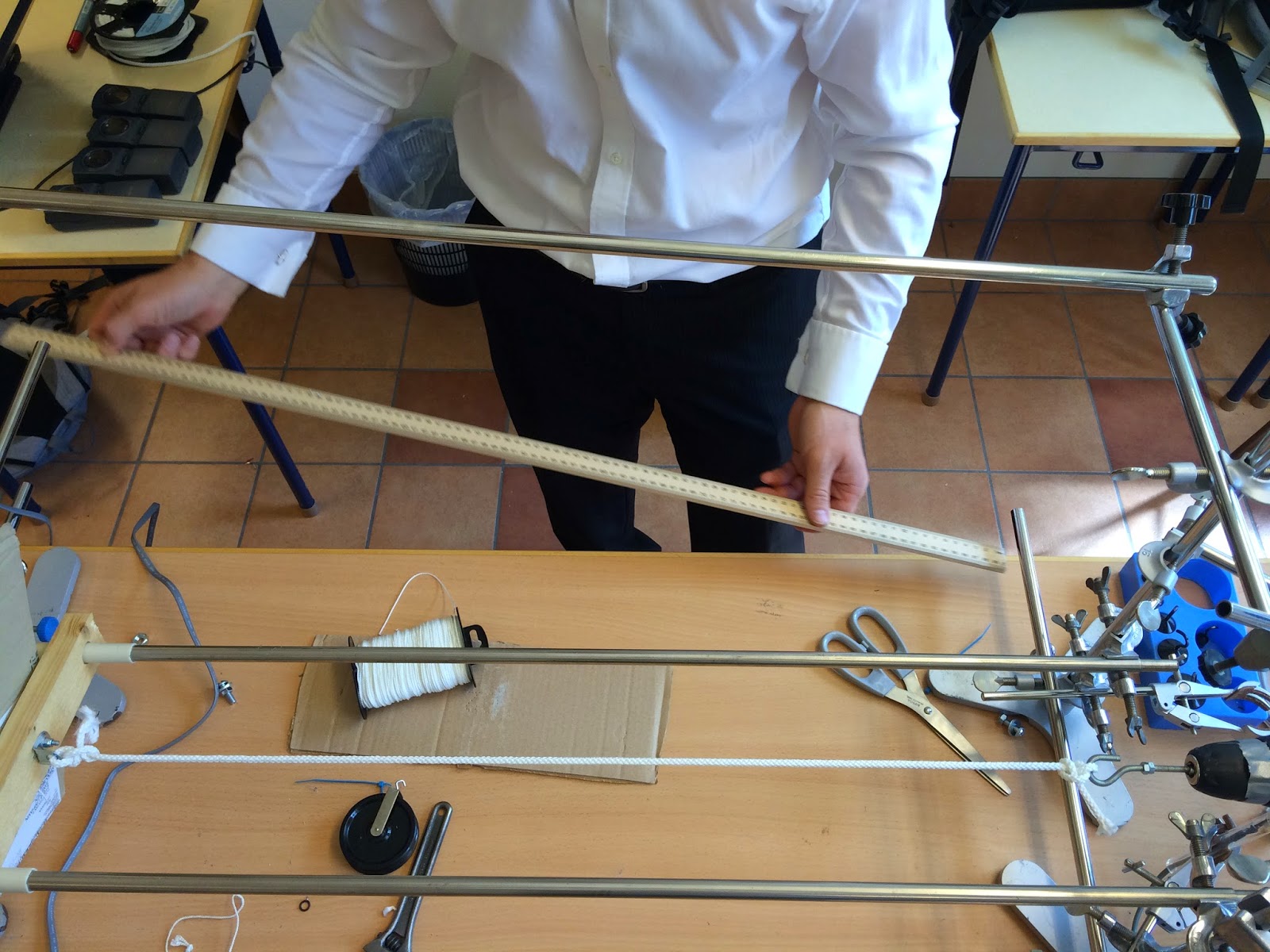 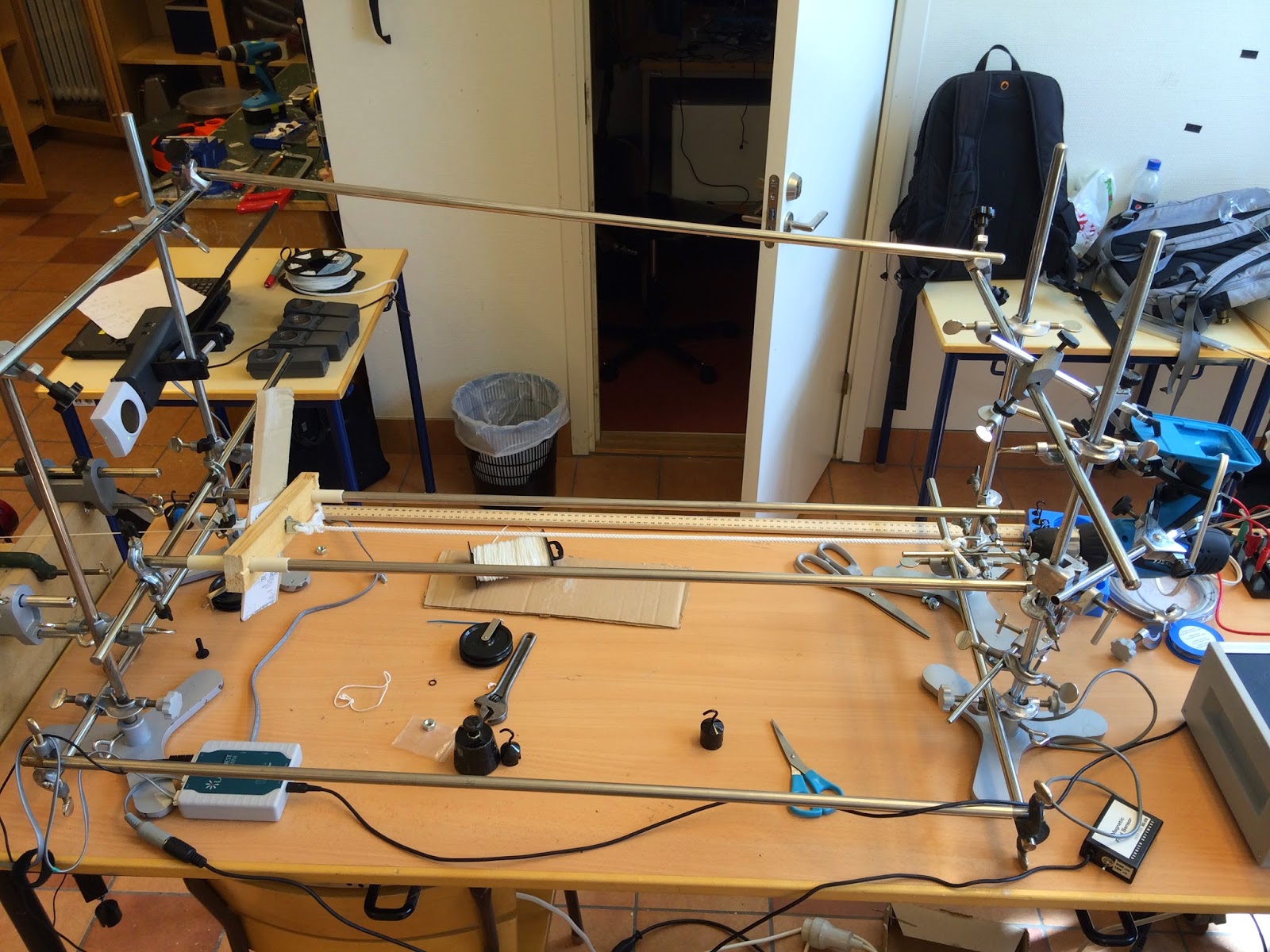 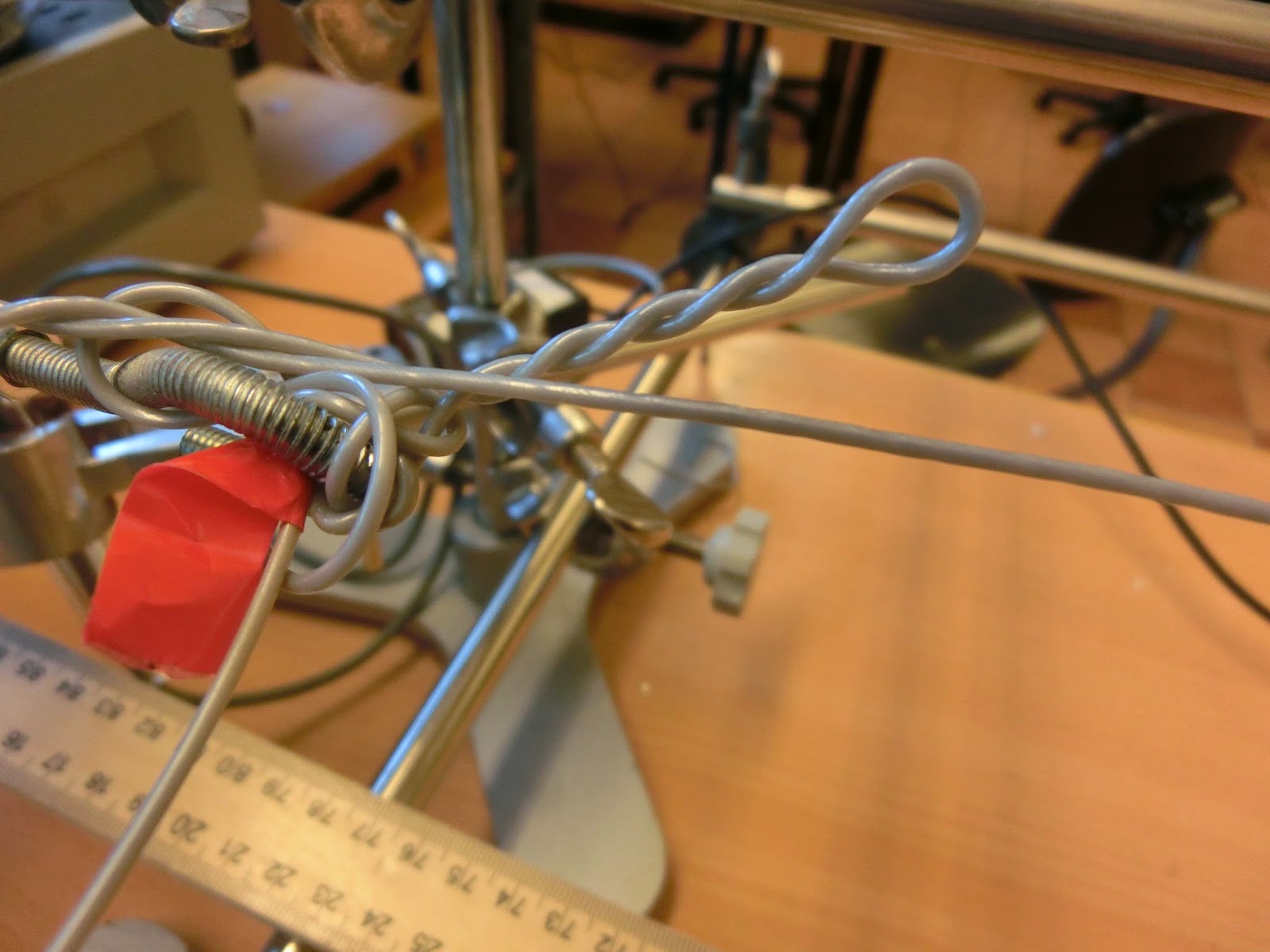